EPiPHiNi is a syncretism in religious symbols.

Expressing the known and unveiling unknown, and apparently unintended corroboration across far to improbable measures of time and space for concluding causal connections.

At the surface it is an eye of World Faiths.

EPiPHiNi was not drawn by God, gods, divination or anything other than a rational, skeptic eye on the subject of Faith.

EPiPHiNi makes one important observation and intriguing things HEPNEN. It observes the results of finding the most economic means to make two, or more, into one.

LET YOUR EYE BE ONE

The Pearl or Iris of EPiPHiNi, is a single symbol combining 5 five* symbols of the major, modern world’s religions. This superimposition within a circle represents Unity & Oneness, much like the coexist symbol seen on bumpers, but without words, as a Whole, Totality, singular image & more, & less…

The Pearl of Epiphini’s 5 symbols and the eye of Ra (UJat) are subjectively described in a numerical order derived from their visual &/or meaningful correspondences, from zero to five. 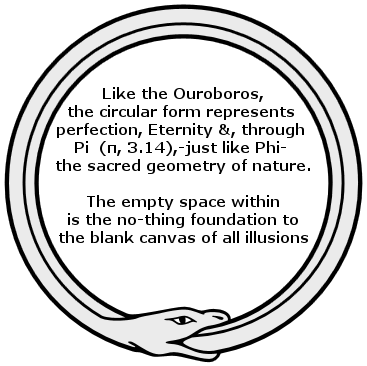 Too the Mayan culture it was one while the Hindu’s called it none.

The circumference is a unit, an encompassing one.

The Empty Center is absence, nothing, zero.

To the left of the iris. Green is the color of peace for Islam. Peace be upon them. The Arch is an illusory Hierarchy of Material, Power and control. It is the bow of Maya to the Hindu; likely its origin. To separate from nothingness, is to become 1.

A symbol of the dualism in all things,

Polar opposites inherent within each other.

The arch on the right of the Om represents the waking state “ah”, the arch on the bottom represents the dreaming state “uu”, the upper arch represents the unconscious or sleeping state “mm” & the small arch is Maya = Illusion of separation (thingness), 1. The dot or circle above Maya stands for “Shunia” which is zero & nothingness. Those last two are like Binary 0 & 1 & together can be called Lingam (form). The AuM looks like a three while including 4 arches, illusions. Aum is considered the sound of creation, the phonetic sound of God’s initial act of creation, “Let there be light”.

Representing Christianity, death, resurrection, the Messiah, Salvation, Sacrifice, the Tree of Life, The cardinal directions, it is the 4 dimensions of all matter. The lower vertical being the longest side, reaching down to earth, speaks to the human condition of apparent material bondage.

Although it is the last of the inner symbols & thereby #5, because the 6 pointed star directly embodies 6, it is reserved for that number. In place of the 5th symbol is the eye. Its name in Kemetian (Egyptian) “Ujat” means the whole one. Contextually, the whole pearl is 5 (symbols/faiths) in 1. This outer eye, the Ujat, in Kemetian glyphs, consists of 6 fractions, which added together do not equal the whole.

It is punningly fitting then, that in such a paradoxical manner the Ujat contains the other 5 iris symbols. Ujat is an illustration of the center of the brain, predominantly the Pineal gland or 3rd eye; formed by the Vesica Pisces, wherein the 5 fold iris rests. For Kemet, the Vesica Pisces alone represents “Ra” the name of the sun god and the word mouth. The spiral coming out of the eye has been conformed to 1.618, effectively Phi of the eye. This spiral also represents the hypo-campus of the human brain, which extends from the third eye (pineal gland). The appendage protruding from the lower right of the eye is the feather of Mat (Truth) and a scroll (Logos). Here we have the word of truth emitted as nature (Phi), created at both sides of the mouth, which is also a goddess of destruction “Ujat”. The eye (as the observer) collapses (destroys) the wave by observation and in the same act creates the illusion of material through words of truth.

This star is of six points & two apposing triangles, 1 set of complimentary opposites, like the paradox of the Yin Yang -who’s meaning branched from a Hindu origin; the same tradition is the origin of this star symbol. The interlocking triangles were originally (in Hindu Sanscrit) “Sri Yantra”, which contains 9 triangles superimposed (4 in one direction and 5 in the other) representing odd and even, male and female. Nine is finality, completion and new beging. This brings us again to 6 via the numeric version “69”.

Above are the Symbols purposefully included in the Eye of EPiPHiNY.

Here follows a preview on the unintended, hidden and unconscious Symbolism within EPiPHiNY:

1) On the cross symbol (#4), located on its vertical line, sit 4 stars .The bottom three stars represent Orion’s Belt. The top white star represents Sirius. A fourth star is not illustrated where the top intersection is, because it is, as of yet, unknown to the public.
2) Red arch Located on top of the circle; the bottom of this arch is formed by the upper horizontal line of the cross (#4) & Star of David (#6). The top is formed by the upper arch of the Om symbol (#3), the Crecent symbol number (#1) & upper arch of the Yin Yang (#2). It is red as it visually represents the rising sun and the birth of a new year, or Winter Solstice.
These stars perform an alignment durring the Winter Solstice, one of the most revered time periods to all religions.

Some time after completing EPiPHiNY I was astonished to find that the arch connected to a vertical line beneath it, which resembles a mushroom shape. It is the same as the Egyptian hieroglyph for Solstice and two of them side by side, stand specifically for the Winter Solstice. I also noticed that there were just enough intersections along the vertical, central line of the iris to match the number of stars in the winter solstice alignment, NEN.
The mushroom itself represents the microcosm while Hep NENs similar shape adds in the macrocosm of a shamans communication with the universe and shamanism is the historical root of all spiritual ideals.
For further details please visit the artists page, syncphany.com
3RDiViGil@gmail.com

Next up, the PEARL OF EPiPHiNY -More info on the hidden symbolism, the unconscious archetypes within EPiPHiNY.

HEPNEN – How the stars align for “Christmas”.